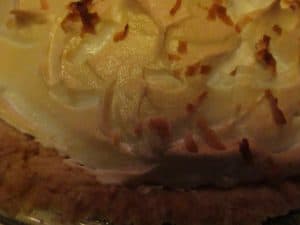 Some meals leave an impression on us. It may be because of the food, the company or the circumstances.

I still remember fondly the family dinners of my childhood. The family stories were passed along with the mashed potatoes. There was laughter and conversation and a sense that this was just one moment in a string of family gatherings that would stretch into infinity. Of course, that was not to be – at least not with that cast of characters.

We won’t get to have Mama’s coconut pie or Mrs. Cooper’s coconut cake again. We might have the recipes, but we all know we never have things just right to bring back those particular tastes. Or maybe it’s the feelings that are missing.

Some meals are special because of the food itself. The first time I tasted fresh mozzarella was in San Francisco. I can put myself back in that restaurant with my friend, Teresa, and feel the creaminess of the cheese contrasted with the crunch of the fresh basil. It’s as vivid as if it were yesterday.

At other times it’s a combination. I was recently invited to a dinner cooked by Chef Renee Kelly. You might recognize her name – she was one of the contestants on Bravo Network’s Top Chef. The circumstances of the dinner were amazing and the food was out of this world. The dessert she served that night was a rosewater pavlova with a pear and cranberry chutney in a hibiscus sauce topped with pistachio flavored cream. Have you ever imagined those things in combination? I had not, but it was just as delicious as it sounds.

I’m one of those people who will whip out my phone for a photo of the food if it’s unusual and that was no exception. I was dining that night with people far more sophisticated than me, but eventually mine was not the only phone being used to capture the moment. I’m guessing there are a few dozen photos of that dessert now in existence.

Although it’s not exotic, I’m delighted to be sharing a recipe associated with many happy memories for me.

Mix sugar, salt and flour together into saucepan. Add egg yolks, milk and butter and mix well. Cook over medium heat, stirring constantly, until the filling is done. When you can stir and the bottom of the pan remains visible, it’s done. Remove from heat and mix in coconut. Pour into baked pie shell and cover with meringue while pie is still warm.

3 egg whites
Up to 6 tablespoons sugar
Vanilla to taste

Beat egg whites until frothy; gradually add sugar, continuing to beat until stiff peaks form. Add vanilla or other flavoring. Spoon onto pie, spreading to crust edge to seal filling in. Bake at 325° for 15 to 18 minutes, until nicely browned. Sprinkle some coconut on top before browning if desired.