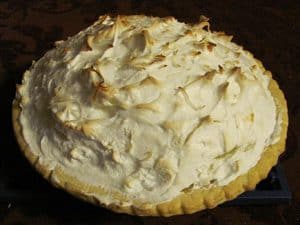 I’ve been on a quest for the perfect pie crust for a very long time. The one I grew up with was lard, flour and water – as little water as possible. When lard fell out of favor we started using vegetable shortening. As we all know, pie crust has never the same.

Making pie crust is far simpler than some would have you believe. Once you get the hang of it, you can do it in five minutes. Plus you never have to buy one again, and you’ll have the adoration of everyone you share pie with.

The tricks to a flaky pie crust are:
1. Keep it cold.
2. Don’t overwork the dough.

These are both for the same reason, and are also the reason your mama told you not to add any more water than necessary to the pie crust. The goal is to keep the fat and flour in layers (actually blobs of fat covered in flour, but let’s not get overly technical) because that’s what creates the flakiness. Keeping everything cold makes the fat less likely to blend with the flour fully. If you keep working the dough until it’s all blended – especially with your warm hands – you’ll destroy the layers and your potential for flaky crust. That was all the easier to do if you put in too much water.

This is why pretty is difficult for me. I leave my crust almost crumbly when I begin to roll it out. It’s barely holding together. I know it will be flaky, but to have those pretty edges I would need a smoother dough. I’m never willing to risk it, but if you practice enough you’ll find the sweet spot. I just let mine be homely.

I explained to a new boyfriend a long time ago that I knew my pie crusts were ugly. He looked at the pie and said with some reverence, “It’s not ugly. It’s homemade. It’s beautiful.” And that, my friends, is how you get more pie!

Some recipes call for a little vinegar, but the science is not on the side of vinegar in pie crusts. The idea is that the acid keeps the flour from creating long strands of gluten, which can make the crust tough. The reality is gluten forms better in a slightly acidic environment. Some suggest using vodka – because it’s only about 60{b69ed140cb44f70e79b409044e826feacbebfdf65ca8fcf35a5d554fd917992e} water you have more liquid to make the crust prettier and the other 40{b69ed140cb44f70e79b409044e826feacbebfdf65ca8fcf35a5d554fd917992e} of the vodka vaporizes during cooking. But I don’t have vodka around so I don’t use it. However, if you need an excuse… Some recipes are made with oil, and you can press the dough directly into the pan without rolling out. But the rolling out – smooshing those layers of fat and flour – also leads to more flakiness.

This is the recipe I love after trying dozens of them.

Mix all-purpose flour, sugar, and salt. Cut in shortening with a pastry cutter until crumbly. Separately mix egg and water, then blend into flour mixture. Chill, then roll out as needed.