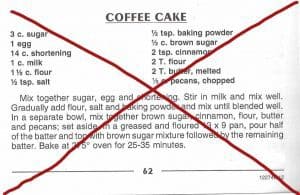 In the August column, the cookbook we reviewed had a typo, which made its way into the magazine as well. I am so sorry this happened! No normal-sized coffee cake recipe requires 14 cups of shortening, so I assumed it would be 1/4 cup.

However, I tried to make the recipe with those proportions and it was a fail. I thought three cups of sugar was an awful lot, but did it as was written. As I feared, the sugar caramelized around the edges, but the cake just didn’t work. I tried to track down the submitter to get the correct numbers, but was unsuccessful.

So, instead, I’m offering you a recipe I KNOW works well because I’ve made it many times.

For topping mix flour, sugar and cinnamon. Cut in butter until it resembles coarse crumbs and set aside.

For cake combine dry ingredients, then cut in butter until it resembles coarse crumbs. Mix wet ingredients. Mix them together just until moistened. Don’t overmix or the cake will be tough.

Pour cake mixture into 9 by 13 pan, sprinkle topping over it. Bake at 350 degrees until done – about 25 minutes.

Each month I submit a few recipe pages from each book to the editor, who chooses what best fits the space and the content of the magazine that issue. I get my copies of the magazine a few days after they’re mailed to subscribers so unfortunately I don’t know there’s a problem until after everyone else. As soon as I know, I post details here and on the Cook’s Library with Patsy Facebook Page. Like that page for the quickest updates.

So sorry for any inconvenience. We’re all just humans and these things happen, despite our best efforts otherwise, but I’m sorry for any difficulties.