“Connection is why we’re here,” says researcher and author Brene Brown. That is one thing I’m certain of. It is wonderful to see the importance of connection being acknowledged by thinkers of our time.

Twice lately I’ve been invited to join with a group of people where I knew very few of those attending. Do we ever get old enough that there’s not a part of us that is still a middle-schooler terrified to walk into our first dance? If we do, it’s sometime after the half-century mark as far as I can tell.

I can find a hundred reasons I shouldn’t go to any event. A few of them may be valid, but let’s just face the fact that I’m probably not really going to organize my tax papers for the upcoming year – or the last year that I filed an extension for – if I stay home. So, I go. Plus, I’m a girl who has a serious problem with FOMO – Fear of Missing Out.

Of course I had a great time at both events, because that’s how this story always ends. I got to meet new people – interesting people – and have fun experiences. Attending events is one of those things we seem to not like to do, but we really like having done.

At one gathering, I gained a temporary henna design on my palm and had fantastic conversation with someone I’d only been casual
ly connected to before. It was easy-going, with amazing food I’d never tasted before. I now have an affection for foods I can’t pronounce!

At the other event we celebrated a friend’s birthday with a night of playing card games. It was also curious to see how those dynamics developed. A couple of us sat down around the dining room table, and pretty soon others had joined up and more chairs were pulled up. There’s something magne

tic about that setup.

There’s an adage about no man being an enemy when his feet are under your table. Although there were no enemies around the table, it occurred to me that’s a good rule of thumb. It seems to be true if you’re sharing food or fun.

One of the best things about summer, other than impromptu gatherings, is fresh fruit and vegetables. This recipe is something I look forward to every year, and it’s one of the simplest things you can imagine. 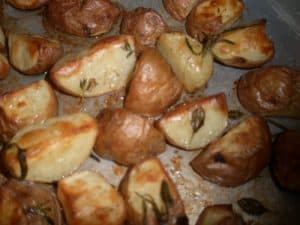 Wash and cut potatoes in halves, quarters, or smaller pieces as desired. Add to a bowl with all other ingredients and toss until potatoes are covered. Spread evenly on a baking sheet covered with foil.

Bake at 400 degrees for about an hour. You can flip them during baking if desired to ensure even cooking. You can adjust the amounts of everything to your taste, but don’t let summer and fresh-from-the-ground potatoes slip by without having these at least once!